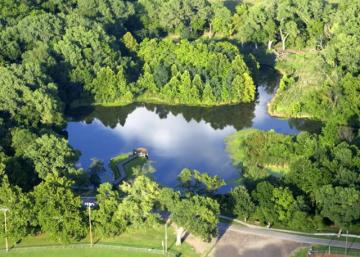 Located at the southern end of Pine Street "Lemon Park" stands as a living memorial to one of the outstanding pioneers of this area, Mr. George W. Lemon.

In 1905 the land was purchased by the Pratt Fair Association from pioneer and businessman George Smith. Mr. Lemon then aquired the site, then 80 acres, in 1920 when the Pratt County Fair Association disbanded. The property was sold to Mr. Lemon for $12,000.00. He promised to develop the area and return it to the city as a park.

On February 20,1940, Mr. and Mrs. Gerorge W. Lemon presented the park to the City of Pratt free of cost. The only stipulations were that it be properly maintained by the city as a free public park, and that no oil or gas well be drilled on the acreage.

Mr. Lemon took a personal interest in the park and beacme an authority on adaptation of woodlands to the climate of central Kansas. As a result there are over 40 varieties of trees planted in "Lemon Park". An attractive brick gateway to "Lemon Park" was designed and added to the entrance by the Pratt Jaycees in 1958. On one pillar is a plaque reading "In Memory of Mr. and Mrs. George W. Lemon".

After the city assumed responsibility for the park, a caretaker's house was constructed and picnic areas were developed with shelter houses and numerous tables and benches. Over the years a restroom was constructed and handi-capped accessible playground equipment was installed by the "Pratt Pilot Club" in 1995. There are two lighted baseball/softball diamonds available for recreational activities.

In 1988 individuals from the Department of Wildlife and Parks and the City of Pratt began construction of a nature trail in the Ninnescah River section of "Lemon Park" south of the roadway. A quiet walk along the completed trail will be a lesson in Kansas wild-life that will be enjoyed by everyone.

Mr. Lemon not only developed this beautiful park for our enjoyment, but provided for the future generations by establishing a Lemon Park Trust Fund. From this "Trust Fund" new trees, shrubs and improvements will continue to be made to "Lemon Park". Thus Mr. Lemons legacy continues.